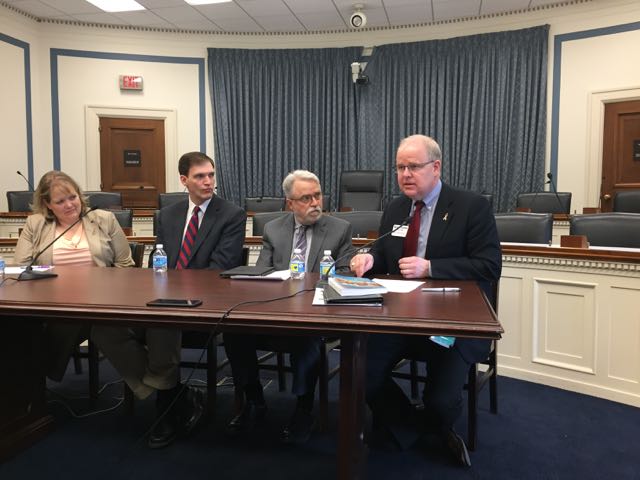 I recently spoke at a congressional briefing on technology in early education, focusing on the overall economic benefits of investing in technology for preK education and special needs. The panel also included Rhian Evans Allvin, Executive Director for the National Association for the Education of Young Children (NAEYC); Benjamin Heuston, Ph.D., President, Waterford Institute; Chip Donohue, Ph.D., Dean of Distance Learning and Continuing Education and Director of the Technology in Early Childhood Center, Erikson Institute; and was moderated by Sara Mead of Bellwether Education Partners.

In terms of special needs and technology, the world has changed immensely in the past five years. An assistive communications device (what a lot of people would know as what Stephen Hawking uses to communicate) used to cost five or ten thousand dollars. Now, with an iPad for less than $500, not only do people with special needs have the ability to communicate and access the Internet, but they can actually interact with society, truly changing their lives. And things will continue to change rapidly. It took 20 years to get to a ratio of one computer for every five kids in K-12 schools (not including early education). It only took about three years to reach a one-to-five computer-to-tablet ratio in our education system, with  Apple shipping over 10 million iPads, and more than 5 million Android devices out there. Technology is part of the reality of daily life, and kids with special needs are no different, except that technology enables them to interact with society in a way they could not before.

In the education business, we are always looking at academic return on investment. Superintendents across the country get a return of $1.10 for every dollar spent, and look to increase test scores by ten or fifteen percent. In the preK market, the opportunity is even greater, looking at magnitudes of difference rather than fifteen percent. Getting kids ready to read when they enter school is critically important – even more so for kids with special needs. In Virginia, a Joint Legislative Audit Review Committee on Autism study found that in 90 percent of children with autism spectrum disorders, if they are able to get intensive treatment by age 3, half will then enter first grade at a near-typical level – meaning they don’t need as much support (i.e. full-time aides), saving a district $209,000 in education costs. Just a few hundred dollars of technology and a qualified educator make a difference that saves more than $200,000 per child.

Why is this relevant? The current incidence of autism is now 1 in 68 kids (and one in seven people now have a family member with autism). Within a few years the ratio will be one in fifty children, meaning every other K-12 teacher will have a child with autism in their classroom. We need to have technology and professional development that supports those teachers. Educating children with autism is very complicated – people earn doctorates in it. If you’ve met one child with autism, you’ve just met one – there are a million more, each with unique challenges. Technology is the key that allows educators to work with not every child with autism, but with the one child in their classroom. 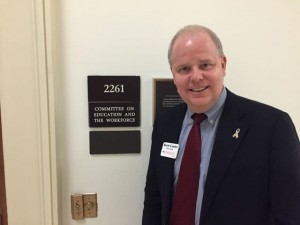 Reaching these children has very real economic implications. Currently, 80 percent of adults on the spectrum are unemployed. Improving this number begins with a good education, which starts with learning to read.  If we can reach children early enough, they will come into first grade with 2500 words or more of spoken vocabulary, and will be on track to read by third grade. And if they can read by third grade, they will be on track to graduate. It’s no coincidence that the percentage of children who can read by third grade is about 60-70 percent, which is about the same as the graduation rate.

Other statistics to keep in mind – 75 percent of crimes are committed by high school dropouts. And 80 percent live within 20 miles of the high school from which they cropped out. That means this is a very local issue. By making sure kids can read, it will decrease the dropout rate, and that in turn can have an impact on crime and poverty. Those in poverty are five times more likely to drop out of school, and once they drop out, are twice as likely to remain in poverty for the rest of their lives.

How do we break this cycle? We use technology to facilitate learning in early childhood, when there is an enormous neuroplasticity of the brain. Yale Medical School’s Dr. Bruce Wexler recently presented to administrators of the Fairfax (VA) County School District on using technology to harness this neuroplasticity and improve executive functioning.  He used computer stimulation games and physical activity to help kids grow the correct neural growth endings and overcome ADHD without Ritalin.  In schools using his product, 83 percent of kids using the computer stimulation game could read by grade three, compared to 58 percent overall. By stimulating the brain, math scores improved from 52 to 92 percent, even though the games didn’t teach math specifically. This is technology that works, that enhances the human experience.

For our leaders, there is an enormous opportunity to break the cycle of poverty, even in the next four years. Fund a study – for about $3.8 million – that will prove that deploying technology in early childhood education helps break that cycle; reading and vocabulary can be measured using existing standardized tests, so there is no need for new assessments. Showing technology can increase a young child’s vocabulary and interaction will make an incredible difference in the child’s life, and ultimately in the life of the community.

In conclusion, let me tell you about a child I know with autism, who stopped speaking at two, then got his first assisted communications device at five. One of his father’s first questions was, “What is like to be you?” The child could finally answer and typed back, “It’s lonely – I don’t have any friends.” The technology he had just received, however, had the potential to change that, by allowing the child to finally interact with the world.  This is the difference technology makes. A simple breakthrough like that for a child and an educator who knows how to get there have to power to make all the difference in the world.